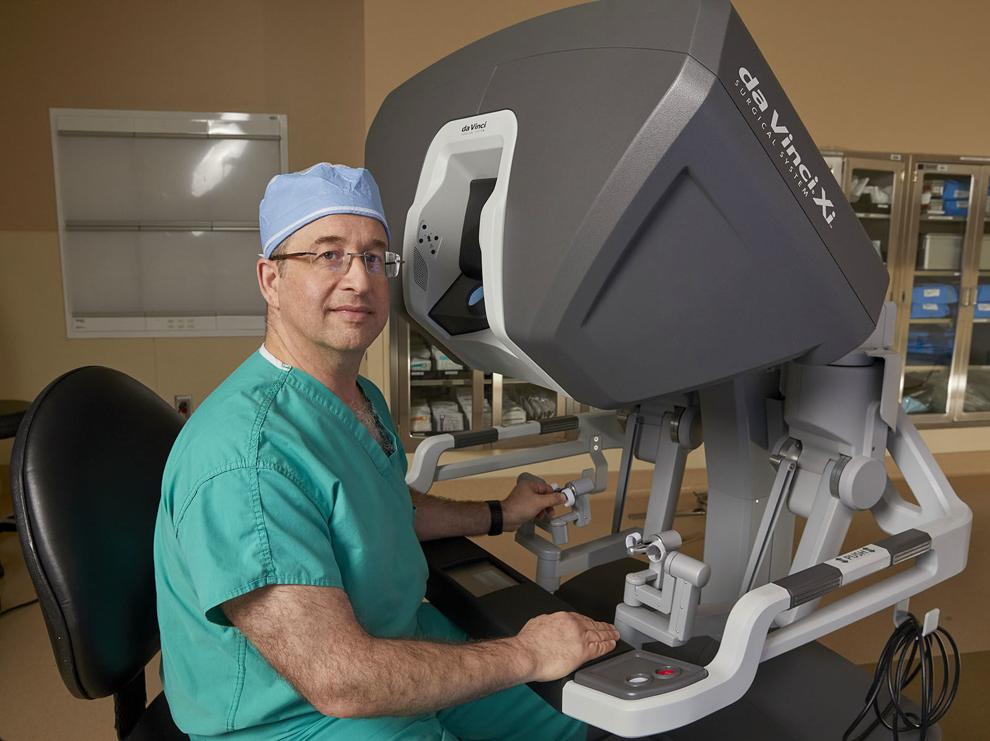 Dr. Scott Miller, seated next to the da Vinci Surgical System, a machine used for prostate surgeries, said he hopes women will purchase ‘How’s It Hanging?’ the book he co-wrote with Dr. Neil Baum, for the men in their lives.

If the check engine light comes on in a man’s car, he will likely immediately take it to his mechanic. And if his mobile phone is not operating correctly, he will usually waste no time in getting it fixed.

However, men don’t usually immediately go to their doctor if something doesn’t seem right with their bodies, and that delay could mean the difference between life and death.

In hopes of getting men to be as alert to their own health as they are to other problems, Dr. Scott Miller, a Sandy Springs resident and urologist, and Dr. Neil Baum, his close friend and a professor of urology at the Tulane University School of Medicine in New Orleans, co-authored a book on the subject.

The book, which deals with men’s urological makeup and medical problems regarding that portion of the anatomy is appropriately entitled “How’s It Hanging? Expert Answers to the Questions Men Don’t Always Ask.”

The paperback book, published by New York-based Skyhorse Publishing, can be preordered online through Amazon.com for $17.99 but will be in bookstores by September. It is in response to what Miller said is a great public need to educate men on their own health, especially from a urological standpoint.

There are numerous books out there on men’s health, but most deal with exercise, nutrition and heart health,” said Miller, who has been a urologist for 22 years and works as the medical director of robotic surgery at WellStar North Fulton Hospital in Roswell. “However, as important as these subjects are, men also need to know about all operations of their bodies, which are wrapped up in this book.”

After he and Baum decided to co-write the book, they had to find a publisher as well as do revisions, illustrations, references and the many other requirements for publishing it, a process that took about 18 months to complete.

“I took my doctor’s hat off and put myself in the shoes of the patient, just as I do in my practice, to write the book so it would be easily understandable, which is always my main goal with my patients,” Miller said.

In the book’s foreword, NFL Hall of Fame coach Joe Gibbs said throughout his career, he has been around men in competitive environments, “and I know, first-hand, that there is often little attention given to their own health.”

“I’m guilty of it myself several times over the course of my career, when I didn’t pay attention to what my body was trying to tell me,” Gibbs said. “Dr. Baum and Dr. Miller address the health issues that men need to pay attention to, including several that we simply are often too embarrassed to talk about, and this book is a great asset to all men who need to make their own health a priority.”

Miller is also the founder of ProstAware, an Atlanta-based nonprofit dedicated to promoting awareness and education about prostate cancer and support programs for the disease’s survivors.

Said Miller, “The worst aspect about men’s health is that males do not take their own health to heart, like women do, as far as recognizing possible signs of health problems and, as such, put off going the doctor is my hope that women also purchase this book and give it to the men in their lives as well as read the book themselves.”